Somehow I had the need to add something good to roast smoked ocáskům. Then it occurred to me, that turn sand the salads. And because I'm due a photo roasted smoked tails went for the tomato, I took them more.

Tomato salad | Rychlá akce
so that. Quickly and easily. The recipe is not it, but you can add a little ground black pepper. Just even here you can use imagination and obsessive taste.
Need:
Units: Servings: osoby
How do you: 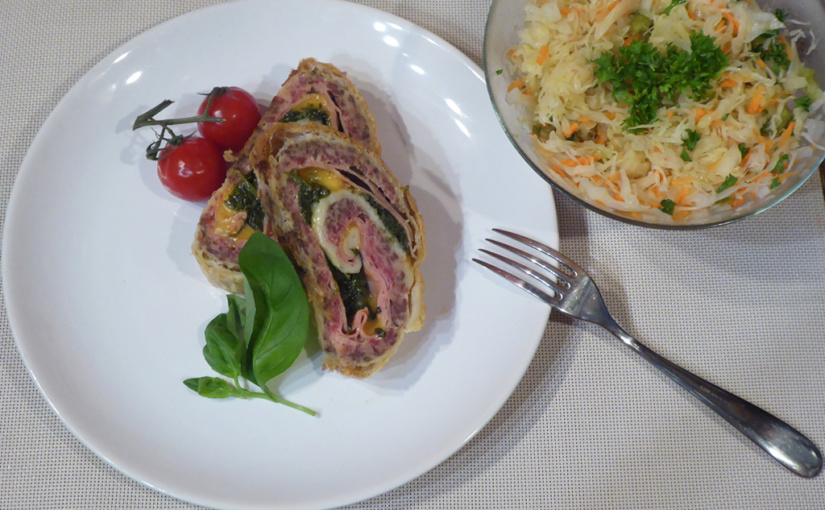 Budweiser Radio sent into the world a recipe for coleslaw, But not ledasjaký, But a salad of pickled cabbage. So let's try. On the net even occurs in version as vyproštovák. No, the needless. The origin will know more about the family of Czech Bednářova Paris, whose recipe resonated ether. It is apparently excellent with roast meat or potato, recommended test instead of boiled cabbage to a conventional pork, dumplings and sauerkraut. So I put the meat rolls.

Salad of sauerkraut | On the waves of vitamins
So it's easy as pie. It can be mixed into a salad honey, cukr, but also by other yogurt, pomeranč, beetroot ... I have not yet tested.
Need:
Units: Servings: osoby
How do you:

Before the celebrations of the 100th anniversary of the proclamation of an independent republic, it seems like sacrilege. Vienna salad but that policy does not. Like the classic potato salad is not worth it, that fame began to build in Russia. For the origin of potato salad reportedly stands a French chef, which made him famous was in Russia. There was preparing him for a selected elite Moscow. But do not count among this elite music in the year 1917. The first recipe for fried carp with potato salad, served with Czech cookbooks to get up in 1924. Although the salad had been contained root vegetables, However, a large portion of mayonnaise in it lacked. A Viennese simply missing. Plus, when you add Pork cutlet prepared after the method of Austrian, as you waltz the Blue Danube.

Viennese potato salad | Lightweight and without mayonnaise
Already, cook it with us everyone (so we can not ignore Zdenek Pohlreich). A není divu. However, prepare Viennese Kartoffelsalat, as if there was only one single. idea? suspects, but prepare Viennese potato salad as if nothing had happened. Already, they are alright. The Austrian recipe missing eggs. But there are recipes with egg. So choose. It's always like Russian roulette. I have to add more peas. Just try what you think.
Need:
Units: Servings: osoby
How do you:

We're going in the summer kitchen. Already, He was inspired melons everywhere, summer, and the idea for the site Epicurious, where Anne Stockwell Senior Food Editor touted savory melons. Why not try it. Conditions are ideal for "cooking" on the knee. Anna is thrilled and says, that you never want to eat watermelon sweet variety. These are the sort of American cries, that does not mean much of anything. But this taste, then choose: naslano chi nasladko?